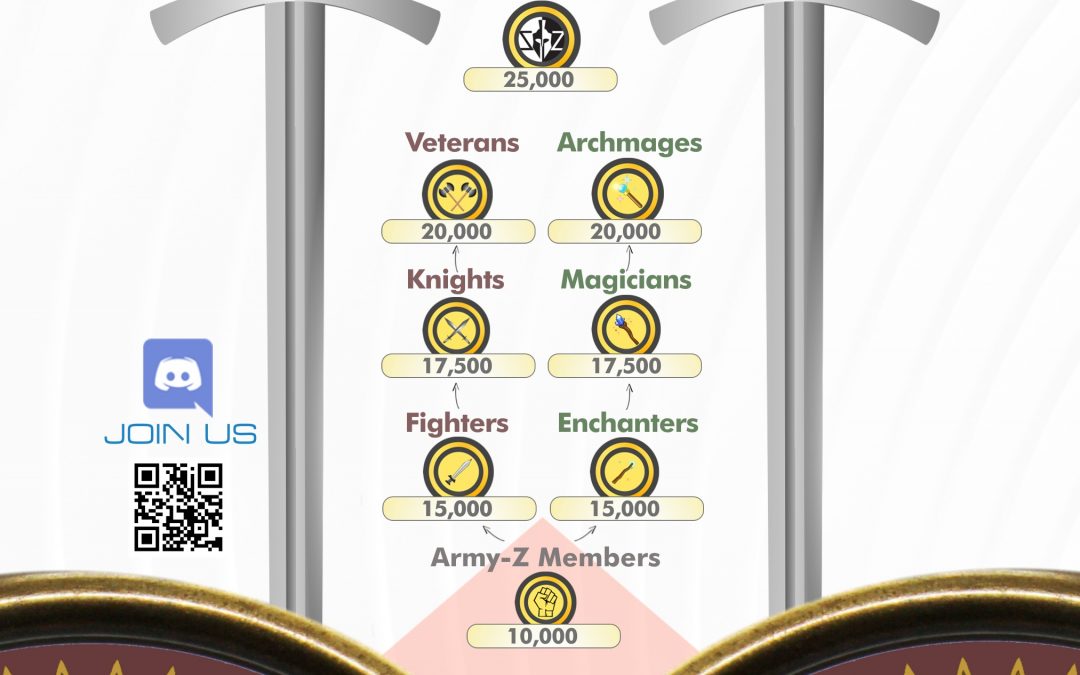 As probably many of you already know, Army-Z was the revolutionary concept of spending a small percentage of our Community Funds for rewarding people that just spread the word about the BitcoinZ Project with their activity in social media. This way, BitcoinZ became the first Proof of Work pure cryptocurrency that enables someone to earn coins even without mining equipment, with a stable pace outside the boundaries of a single competition.

Army-Z worked quite well as the Project made it to strengthen its presence in social media with much more interactions , twitter trends and of course improvements for all the statistics in our Community’s social media profiles.

Some great recent results coming from Army-Z were for example the TradeOgre listing or the BitcoinZ mentioning by Gate.io (rank 7 exchange), events that would have been almost impossible to take place without a coordinated “social media attack” that Army-Z provides for our Community.

Army-Z 2.0 is the next level of the revolutionary Army-Z idea.

It was planned after the in-depth analysis of all the Army-Z concept flaws and has been the result of the hard job of many weeks.

The general idea is to cease having a “black or white” , “Army-Z or not Army-Z member” dual situation because obviously there are members that are extremely active, members that are elementary active because they don’t have much time and some people who possibly try to abuse the mechanism just in order to receive rewards and rarely help the project.

With Army-Z 2.0 , we are going to have a much more sophisticated structure with medallions which are related to ranks/levels. The user will be able to join Army-Z and get the basic “Army-Z member’s” medal after a relatively easy review of his associated social media Twitter account and then advance to higher ranks by gaining more medals.

We are going to have two different categories of medals, that are called functions:

Finally there is a special General’s medal that is granted to the Community’s social media administrators and Army-Z supervisors.

Each medal/rank has a relevant pool with weekly rewards that are distributed every Friday exclusively to the members that have these medals/ranks.

For example the Army-Z “basic” members have access to the Army-Z members’ rewards that are 10,000 BTCZ coins per week. 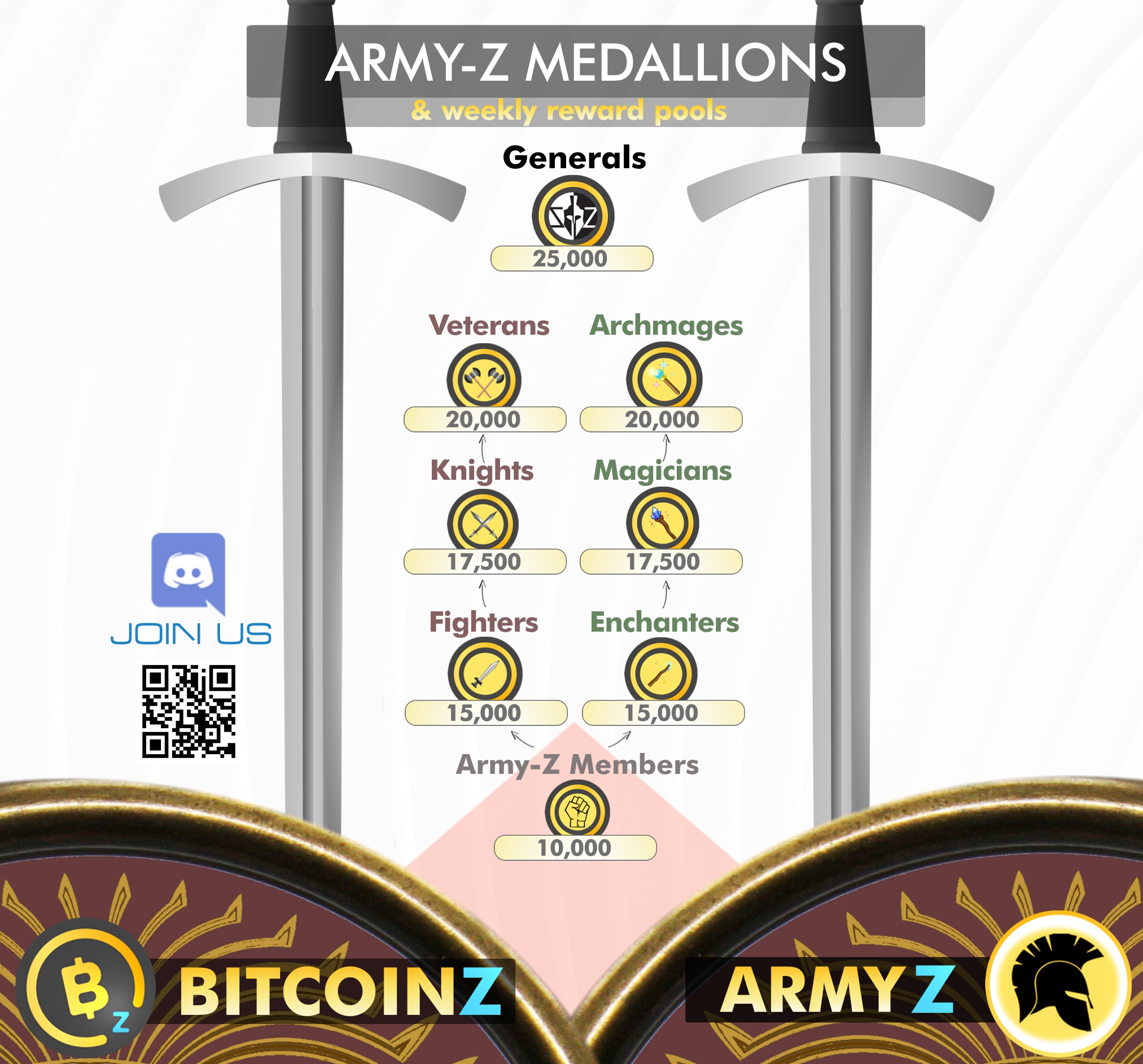 In order to advance to a next level/rank , a member of course has to fulfill its requirements and to first have acquired all the previous ones in the same “chain”.

A Fighter has to first be an Army-Z member.

A Knight has to first be a Fighter and so on.

So a Fighter is included in both the Army-Z members’ list and in the Fighters’ list, receiving rewards from both of these pools of rewards every week.

In the same way, a Knight is included in all the three lists of Army-Z members, Fighters and Knights (since he has all these three medals) and he is receiving rewards from all these associated pools of rewards.

Obviously, as the requirements are higher for each rank , the list with the members that are eligible to receive a higher rank’s rewards are less and the rewards are much better. In contrast, a single Army-Z member is in a much more populated list , sharing the weekly rewards with many more other people.

The requirements for each rank can be found in the following Medallion/Ranks Analysis table. 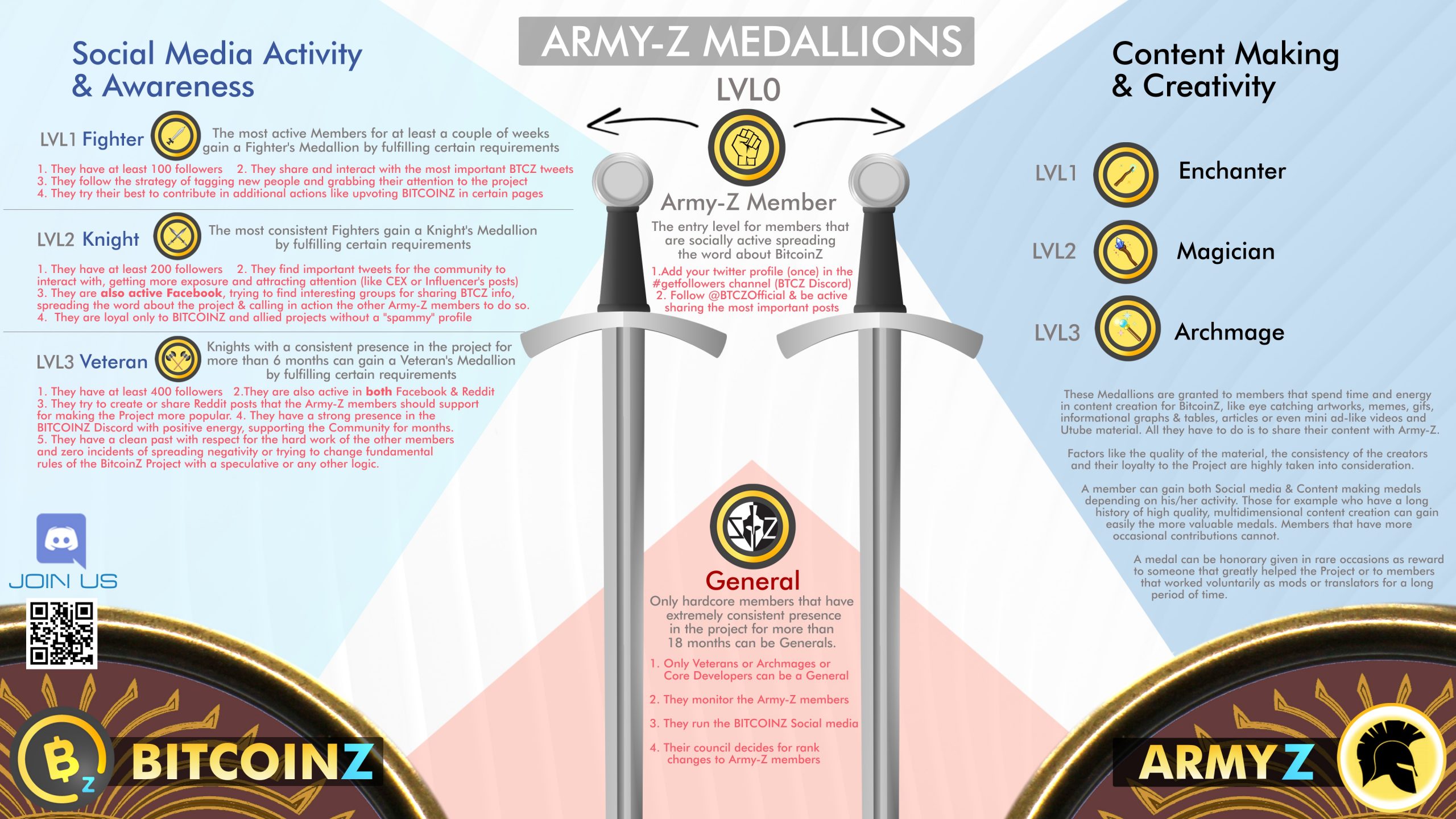 What do we achieve with Army-Z 2.0

Army-Z 2.0 upgrade is the most fair thing that we can do in order to achieve many improvements :

→ To reward accordingly each member depending on his efforts

→ To motivate more people to be more active

→ To filter the abusers more effectively because the rules are very transparent and detailed for each rank, even for the very elementary medal.

→ To at last reward the Content Makers and even some members that work voluntarily for many years.

→ To have space for honorary rewards in some very special occasions that a friend of the Project has made a great deed for supporting it.

By upvoting this Army-Z 2.0 proposal, you upvote for an increase of the Marketing budget to 15% (from 10% now) coming from our yearly VaultZ income to the Community Fund. (Out of this 15%, 7,800,000 coins are going to be used in Army-Z 2.0 and the rest 2,000,000 for press releases every year with the logic that the Community had with the VaultZ budgets proposal vote).

In order to vote for this proposal you have to visit the BitcoinZ Community’s Forum. There you can find even more details like a detailed section with Frequently Asked Questions and answers.

VOTE IN THE BITCOINZ FORUM ! 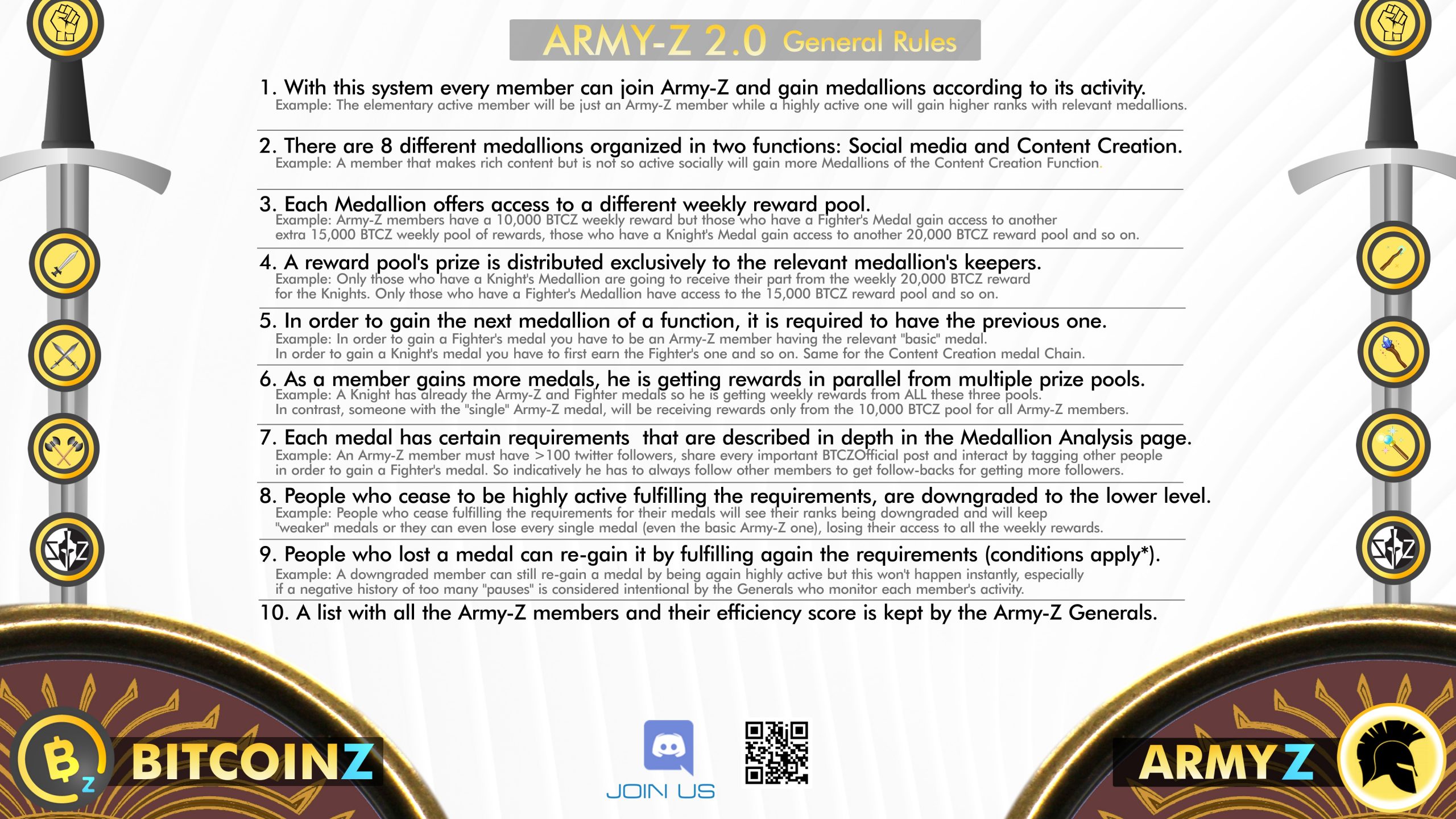