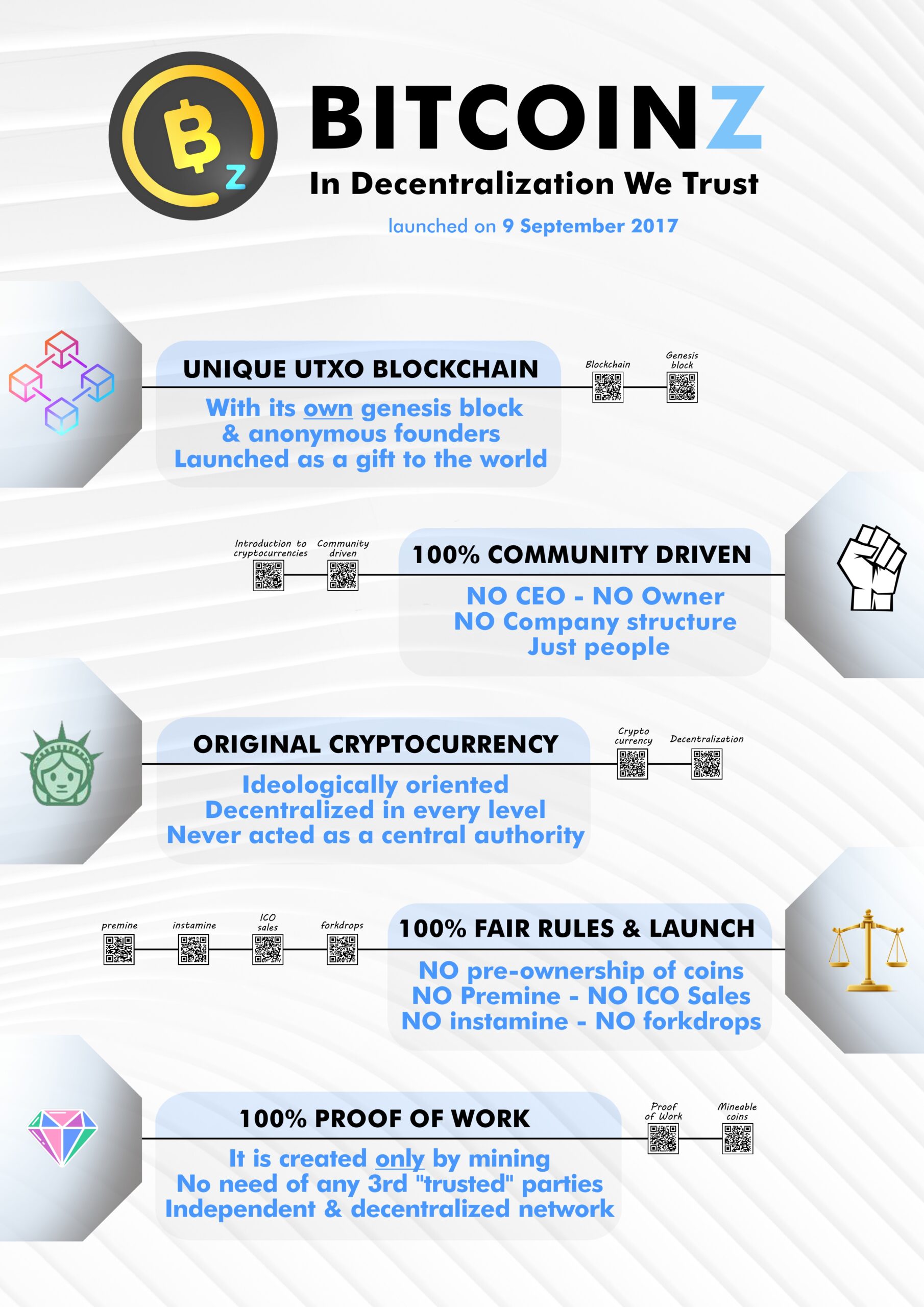 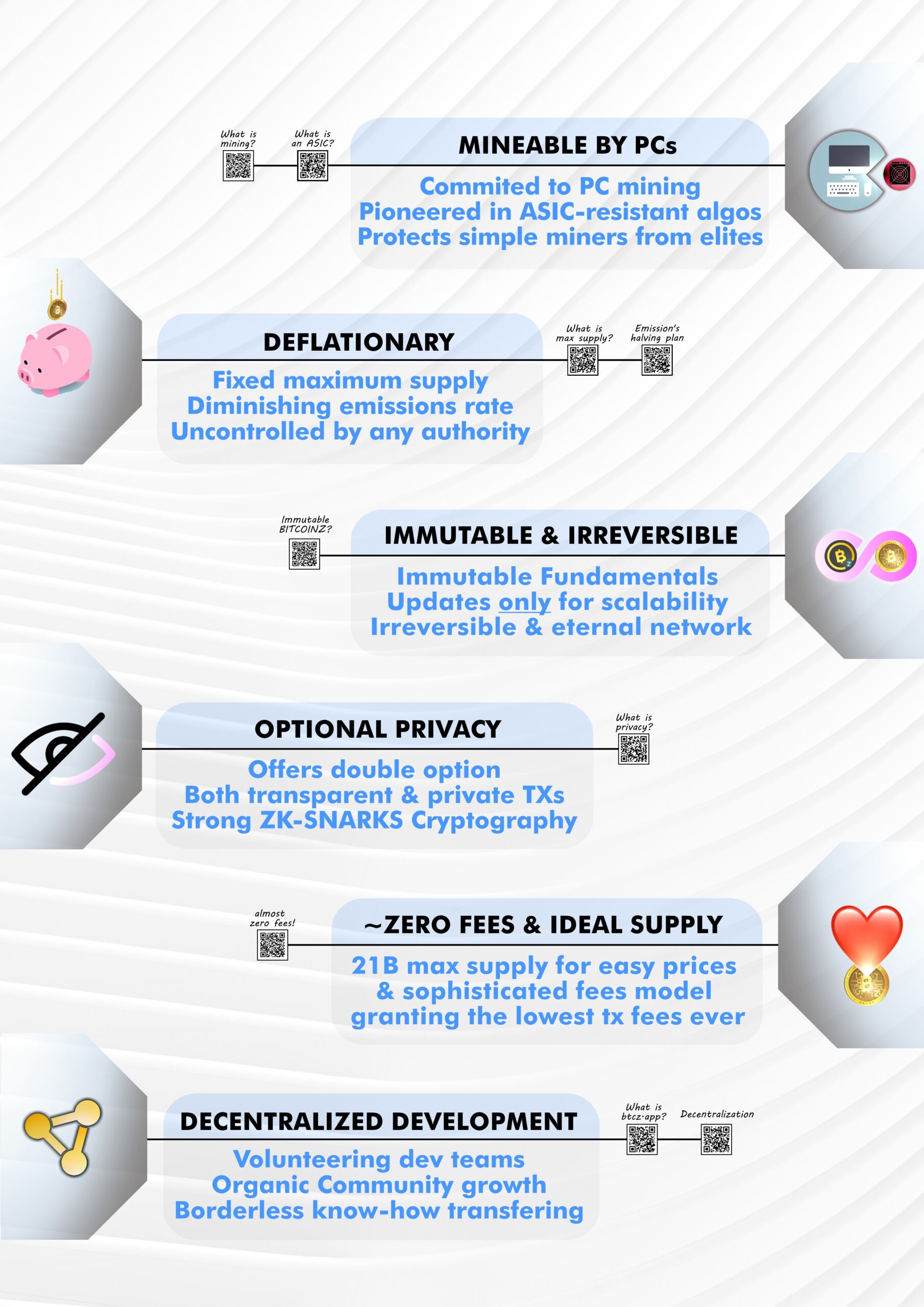 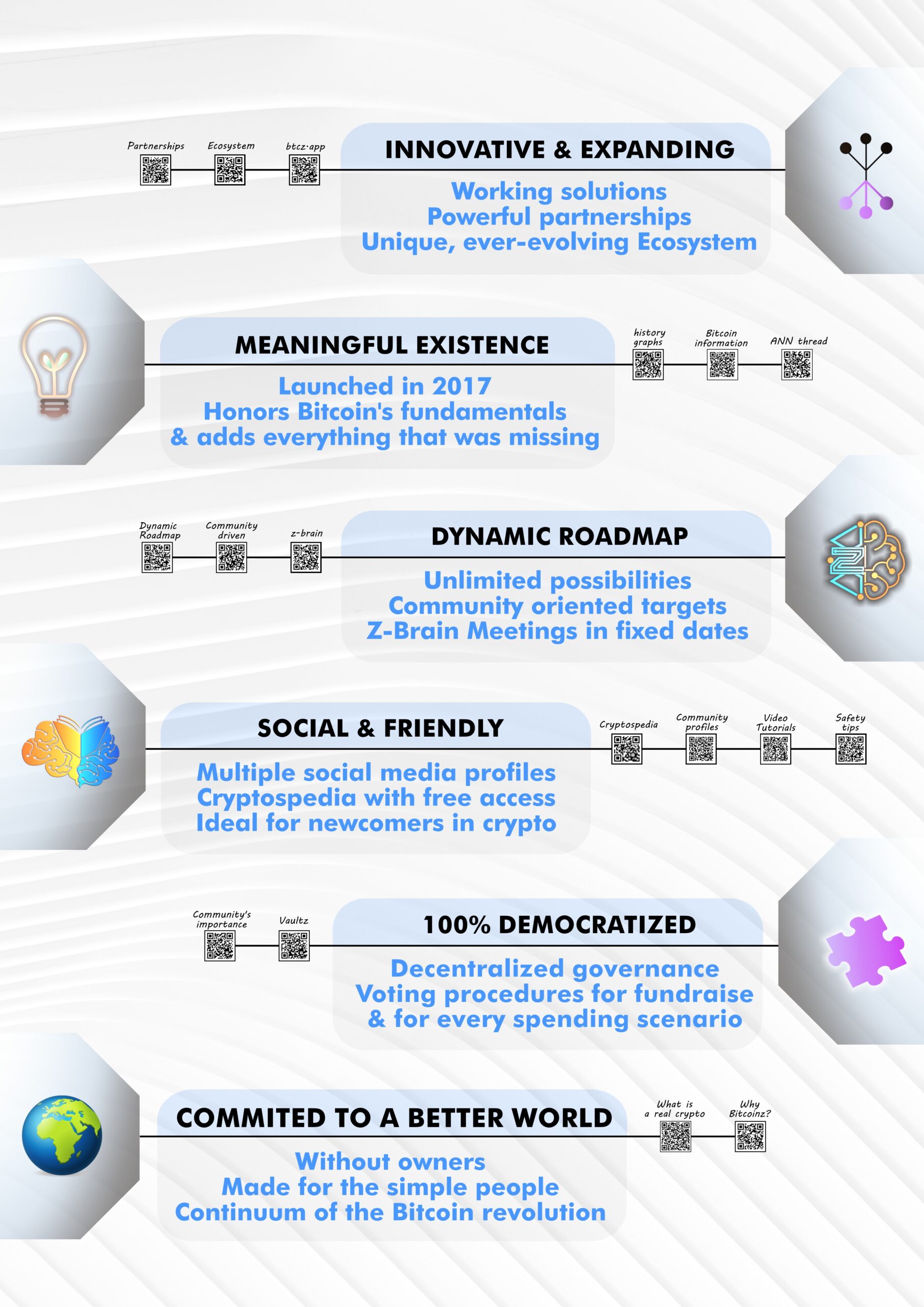 It has the fundamentals of the well known Bitcoin :

It  is completely Community Driven so it has no owners or CEO. BitcoinZ implements the Proof of Work approach (it is minable like Bitcoin)  and it is ideologically based with a noble cause, targeting to offer worldwide free transactions with virtually zero cost for all. 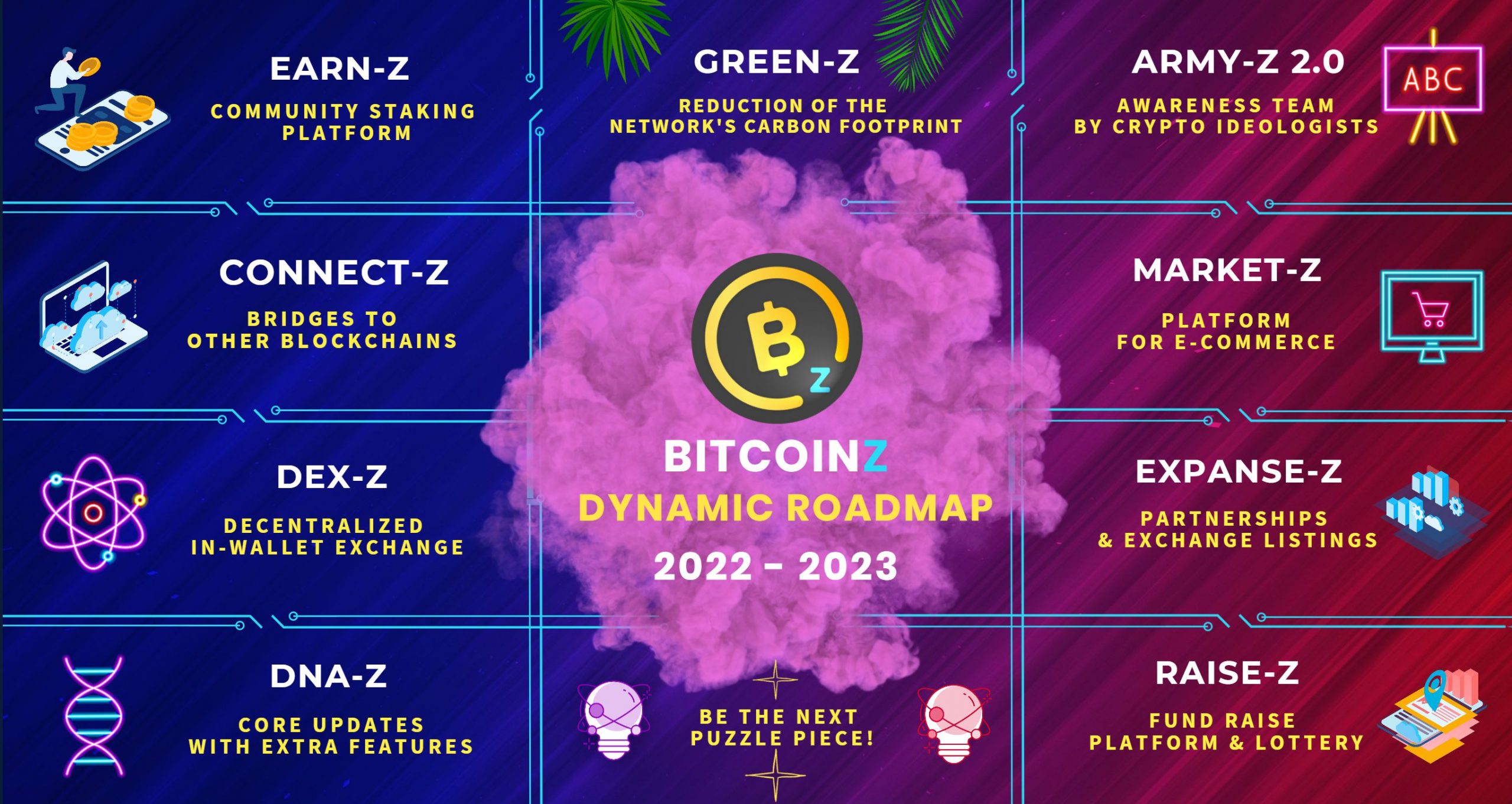 However BitcoinZ has its own genesis block, it is not a Bitcoin fork and is not an airdropped coin to Bitcoin (or any other coin) owners.

BITCOINZ had a transparent and fair launch with :

NO premining (no coins allocated to any adress before the source code release),

BitcoinZ is technically utilizing the ZCash core, offering privacy features (something that Bitcoin does not do) with the Zk-snarks cryptography and is achieving considerably faster transactions speed.

In addition, the coin has been designed with a bigger maximum supply of 21 Billion coins targeting to make the prices easier without long decimal numbers.

The reduction of  block rewards for BitcoinZ has a similar plan with these of Bitcoin (every 4 years), keeping a fair character in rewarding both the current and future miners of the coin. This comes in contrast with the speculative plans which are used by many new cryptocurrencies, targeting to give huge Rewards only to their initial miners by halving the rewards with a very fast pace.

Furthermore, BitcoinZ is utilizing algos offering the maximum possible ASIC Resistance. It pioneered in that , with the “ZHASH” mining algo. It was an Equihash variation which resisted the ASIC Miners wave and it was widely used afterwards by many projects.
This way, BitcoinZ always protects the mining Community and it maximizes the Decentralization by making the coin minable even by a typical PC with a low-end GPU.

BitcoinZ has already completed almost all of its first Roadmap’s targets and has passed to a second one: the first Dynamic Roadmap in the Cryptocurrency world. An ever evolving Roadmap full with innovative projects, expanding the BTCZ unique Ecosystem.
Btcz.app payment gateways, TxtZ,  Btcz.me easy share, VaultZ and Digital EatZ, just to name only a few.

In BTCZ’s Roadmap almost nothing is static, as the Community members can interact with their votes in order to change the priorities or add brand new targets which are funded by the Community Fund (VaultZ).

BitcoinZ is listed in 7 exchanges, it has its own mobile and full wallets and it is hosted in the most well-known multiwallets as well, like Coinomi, Zelcore, Vidulum, PlusBit and SafePay.

You will find BitcoinZ in the most famous crypto sites and apps like Whattomine, CMC, Blockfolio and Delta. 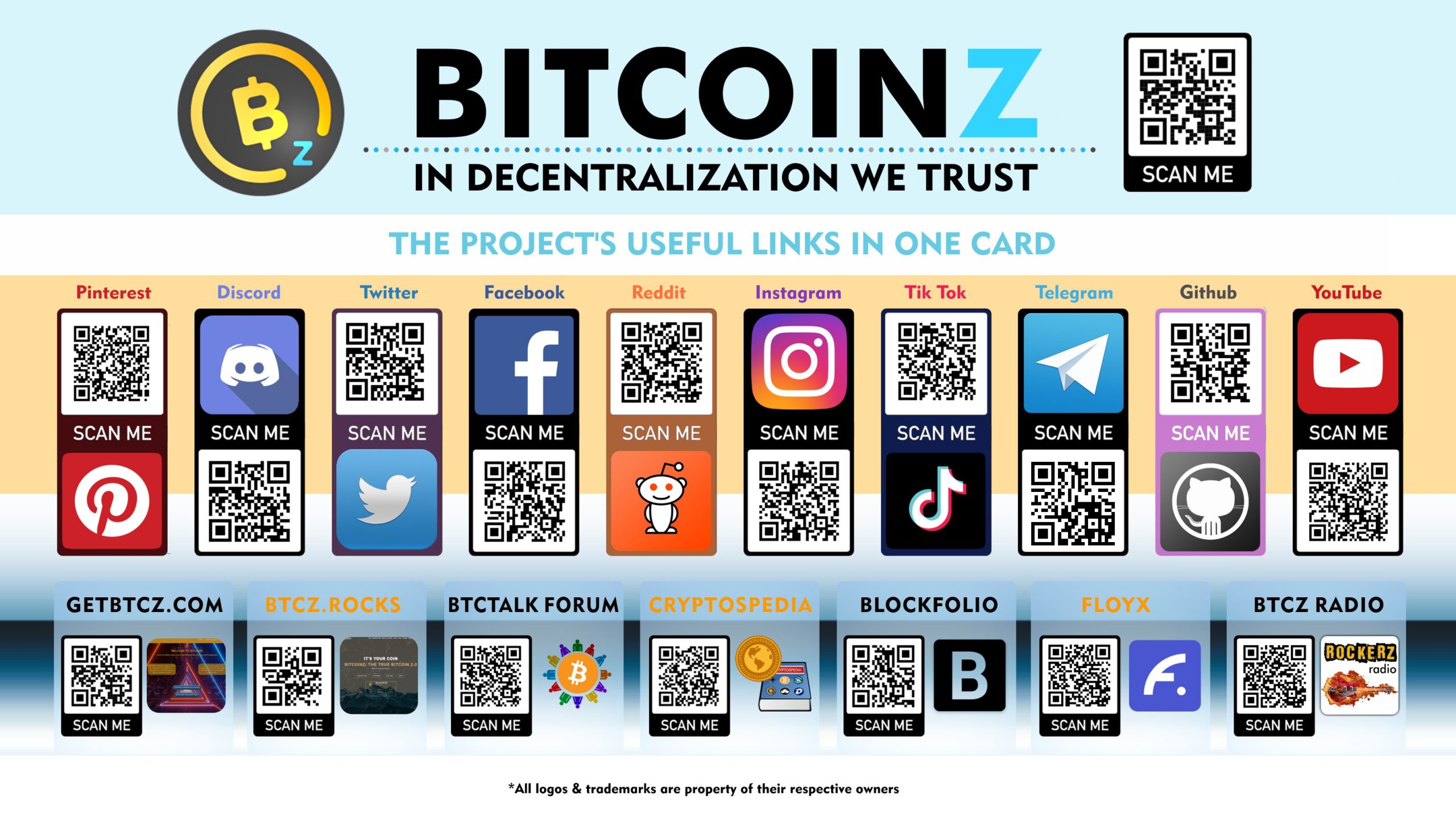