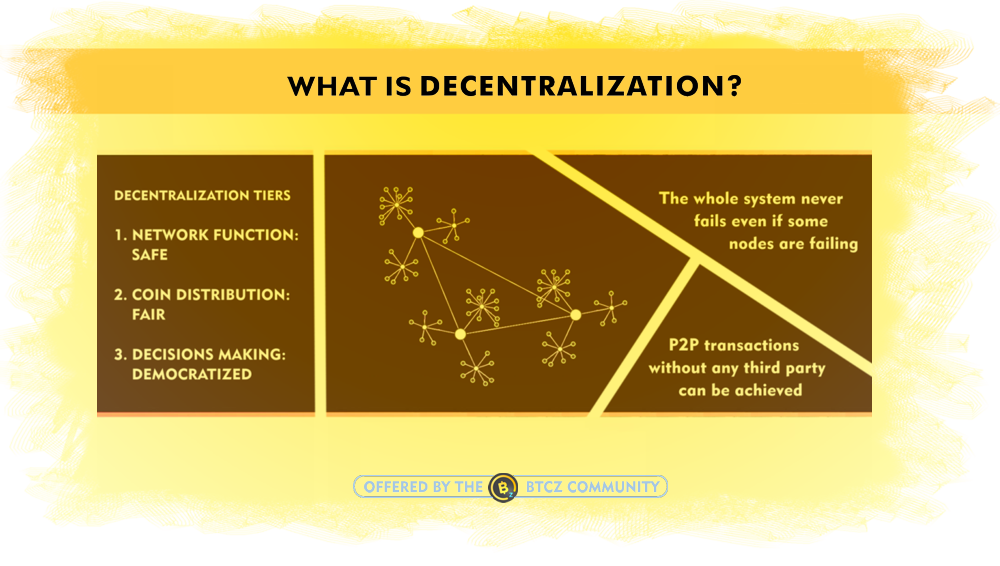 Decentralization is the process of distributing and dispersing power away from a central authority.

In the world of cryptocurrencies , decentralization plays a critical role in many aspects. Some of them are safety, security and their very philosophy which has lead to their design and future expansion. This is why decentralization is usually mentioned as something really important especially after the launch of the legendary Bitcoin. However the cryptocurrency projects which are really decentralized in every level , are very few. 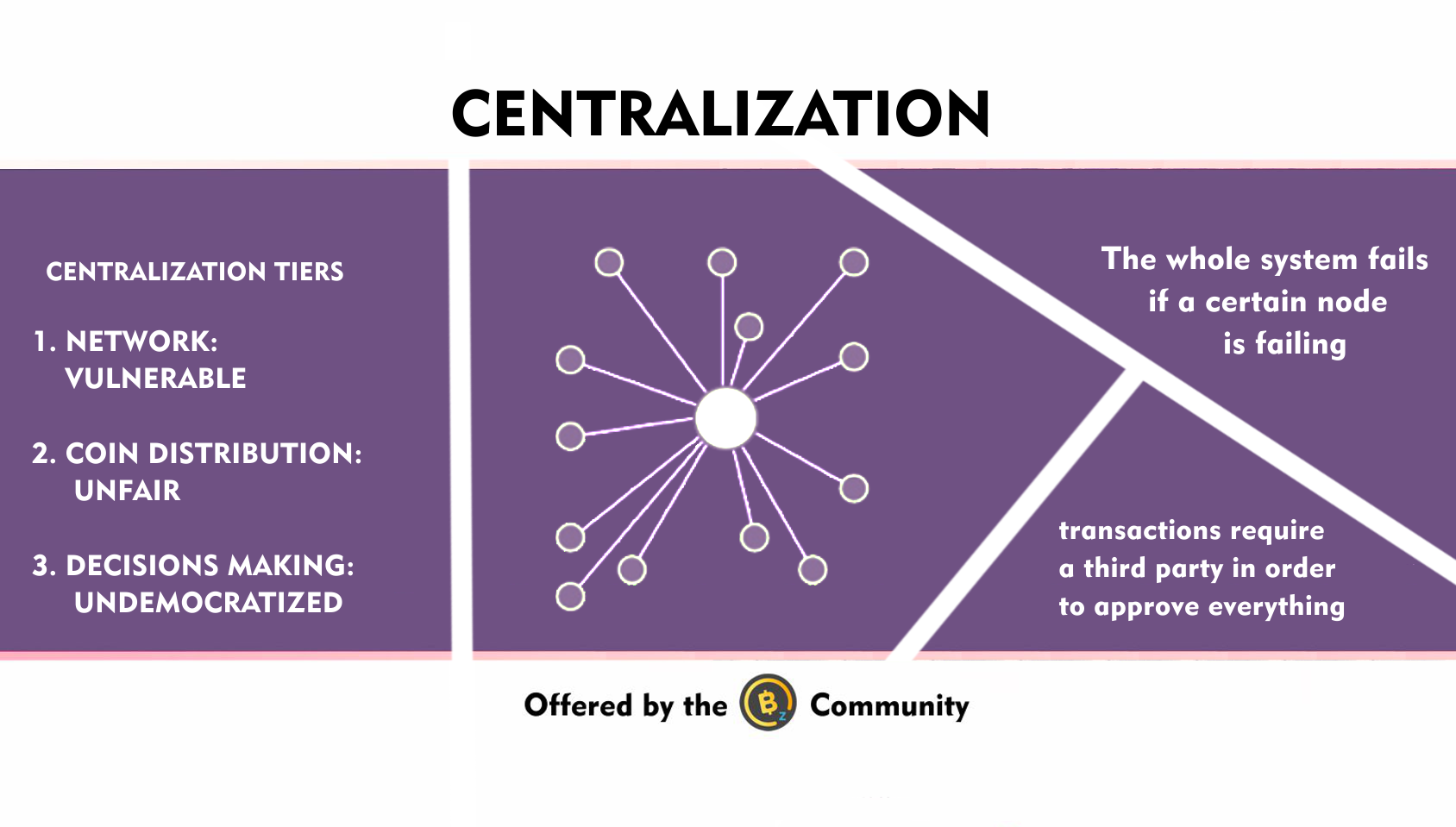 The three tiers of Decentralization

There are three major tiers of Decentralization for the Cryptocurrency Projects:

1) The tier of the Network:   This is the way that the whole network is built, based on the transaction model that is used. For example a Proof of Work network is trying to have its hashing power decentralized in order to provide a peer to peer transaction system, without the need of a third party -like a bank- approving every transaction. The PoW model was introduced by the legendary Bitcoin.

2)  The tier of the coin distribution: This is the way that the coins/tokens of the Project are distributed. A higher concentration of the coins in specific addresses leads to Centralization of funds. This increases the risks of potential attacks and it usually comes from unfair tactics. Like projects with huge premine or third parties that target to function as a bank with blockchain technology. This happens because after the great success of the Bitcoin, they have realized that the pure PoW coins are here to stay for good.

3) The tier of the decision making : Very few projects achieve both the above plus the decentralization in their ecosystem expansion and decision making. This can be seen only in really Community oriented Projects. Because there is no company behind them but a whole Community caring for the Project and doing the best for its organic expansion. 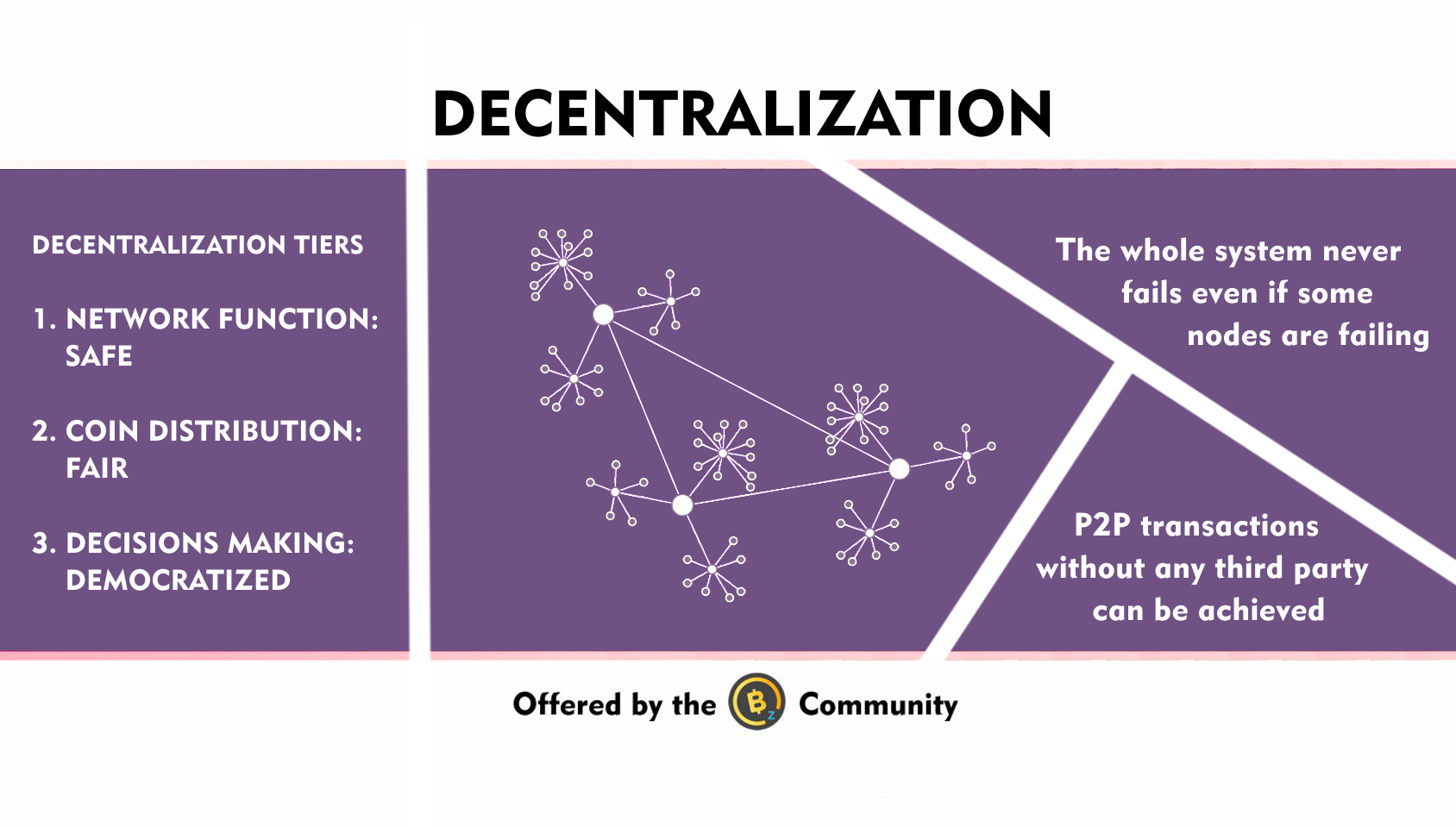 An example for the tier of the Network

Let’s suppose that we have a network hash rate of 3,000 Sols (or 3 kSol) as 50 people use their gpus in order to mine a digital coin with the ZHash algo that most ASIC miners cannot effectively mine. We are supposing that all these 50 people have one mediocre GPU , let’s say Nvidia 1070ti which can mine with a speed of 60 Sols/s for ZHASH solutions. 50 people x 60 Sols/s = 3,000 Sols/s or 3 kSol/s.

Let’s suppose that we have a network based on the classic Equihash algorithm where just one Z9 ASIC Antminer is mining. It can achieve a speed of more than 30,000 Sols/s or 30 kSols/s! The second network seems to be more powerful and to have more participants but in reality it has just one miner with a specialized device that makes the mining procedure completely meaningless for every other potential miner. Additionally it makes the network dependent exclusively on this device and extremely vulnerable.